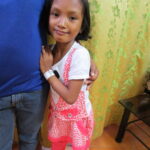 Freidelyn Morallos is 10 years old, female, born to Mrs. Dolores and Alfredo Morallos Jr. on January 1, 2005. They are from Brgy. Binongto-an Cabariwan Alang- Alang, Leyte, Philippines. She has a sister named Jennyvie Morallos aged 7 years old.  Her father and mother are both farmers.

In December 2013, after Typhoon Haiyan, she was diagnosed having Patent Ductus Arteriosus.  At first, she was complaining of being tired for after a walk, then she was feeling weak at school and couldn’t participate in their Physical Education Class.

Her parents couldn’t afford the operation so they waited patiently for someone who could help them. They were eventually introduced to Dr Abi Estelle and Willing and Abel.  Freidelyn is now doing well post op and her parents are very thankful to Willing and Abel for facilitating their child’s operation.

This site uses cookies to ensure we give you the best experience. By continuing to browse the site you are agreeing to our use of cookies. Find out more