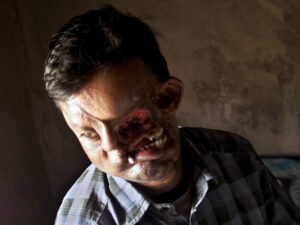 Condition: Severe disfigurement/loss of left face due to a vicious tiger attack at age 14.

As a young boy Hashmot earned a living as a fisherman working the network of rivers that cover the Sunderban region of southern Bangladesh. But one evening, as he lay asleep on the deck of his boat a Bengal tiger crept out of the mangroves and attacked him. He woke up four days later in hospital to find that doctors had performed enough primitive surgery to keep him alive but the experience had left him horrifically disfigured.

For the last 19 years Hashmot has lived in the shadows, covering half his face with a crude bandanna and hiding his disfigurement from the world. Too scared to go back to work in the mangroves, he lost his job as a fisherman and has been forced to take menial work at a local market where he stays out of view of prying eyes.

Today Hashmot wants nothing more than to be able to raise his own two young children without having to hide his face from them as well.

Operation: Our goal is to raise the finance to give Hashmot the medical treatment that he desperately needs in order to face society again, and more importantly, to be able to interact with his own children without alarming them. To do this we have secured the involvement of one of the UK’s leading physicians, who has agreed to carry out the treatment, and we have also begun a partnership with a BAFTA-winning producer who intends to film the whole life-changing process as part of a major UK documentary… what we need now is you!

This site uses cookies to ensure we give you the best experience. By continuing to browse the site you are agreeing to our use of cookies. Find out more